I got back at 4.30 p.m. in time to see the rooks and a few jackdaws flying high over the rookery heading east. Presumably heading for the Binscarth rookery to roost. There were 315 rooks and 2 jackdaws. 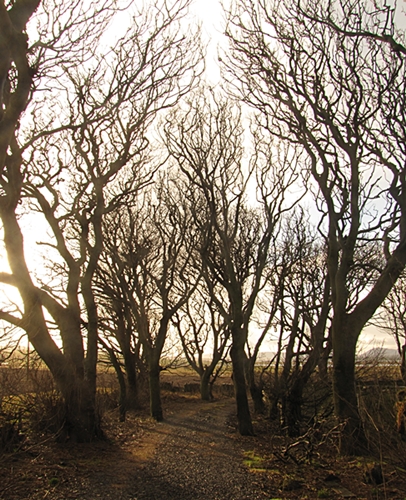 The first I knew that there were rooks here today was when I heard them from the kitchen as they flew noisily out of the rookery and towards the back fields. They hadn’t roosted but they had arrived once the rain had stopped at about ten. Once the rain had stopped, blue sky appeared and we enjoyed a lovely winter’s day, albeit with the occasional shower.

Around midday a number of rooks returned from the western fields to the rookery, each new arrival greeted with caws and occasional soaring and circling around.

I went out and photographed the remaining nests. For a colony where there were at least 70 pairs last year the autumn and early winter have taken their toll. 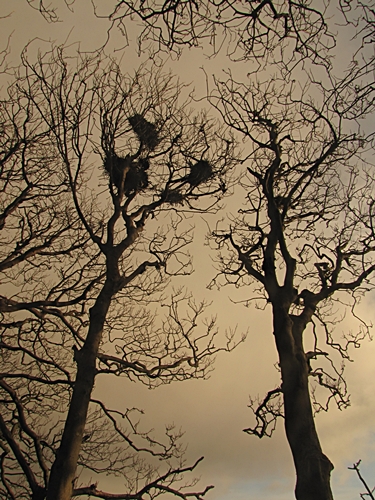 At 4.30 p.m. there was plenty of noise as the roost, as I thought, arrived. Jackdaws were heard amongst the 300 or so rooks. But after a good bit of circling around they left to roost elsewhere.

Despite last Sunday and Monday being calm no rooks roosted. About 200 rooks were seen on Monday feeding about a mile from the rookery. Since the wind has got up few rooks have been seen. Today with heavy rain and hail showers and a westerly wind close to Force 9 at times rooks have been conspicuous by their absence.

At first light there were two ravens in the rookery, they had presumably roosted. Then at around 08:30 or so, first just two, and then eighteen flew through, heading west to feed. The main body arrived perhaps some twenty minutes or so later and checked in to the rookery before heading out west too.

During the calm sunny, anti-cyclonic day and about 250 rooks were around the rookery.

In the late afternoon there were about 200 or so rooks present until dark. When I took the dog out late on, 23:00, I couldn’t hear any rooks and there was not a murmur although I shone the torch on the trees. However, a last look out an hour later and a few called. This is the first time rooks have roosted here since the autumn. 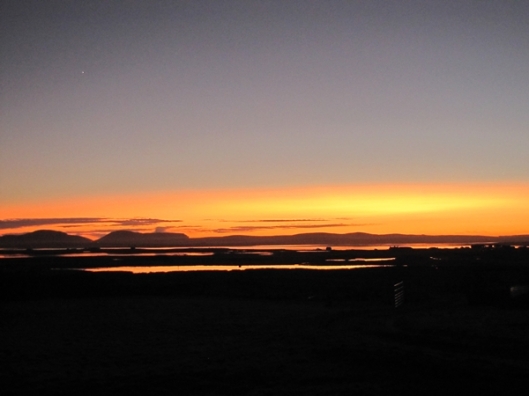 Calm weather with even a hint of sunshine yesterday morning led to about 100 rooks messing around in the rookery and heading off towards the neeps field to feed. Today in the strong westerly with periodic heavy rain not a rook was seen all day.

24 rooks were seen hurrying west by The Shunan this morning, presumably off their roost and to feed; there were three jackdaws with them.

Only one rook has been seen so far today in the continuous downpour and cool northerly wind. Yesterday was very cold, windy and wet as well and no rooks were seen around home.

New Year’s Day was bright and not so breezy and there was plenty of activity around the rookery. About 250 rooks were present with a few jackdaws, perhaps ten.

The rooks were back and forth between the rookery and the neeps field where they were feeding with common gulls.

At about 3.00 p.m. the rooks left, flying high south-east in ones and twos and small, loose groups. At the moment they’re not roosting here and haven’t done so since early autumn. 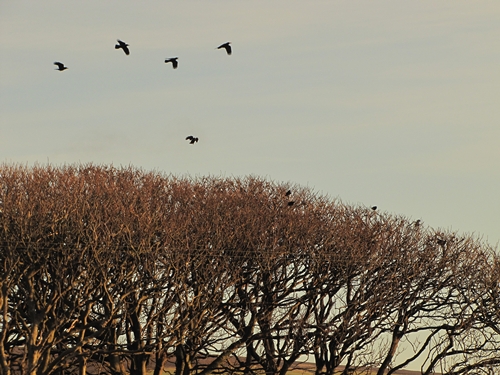 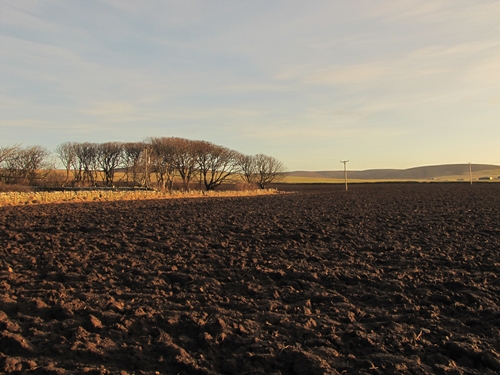